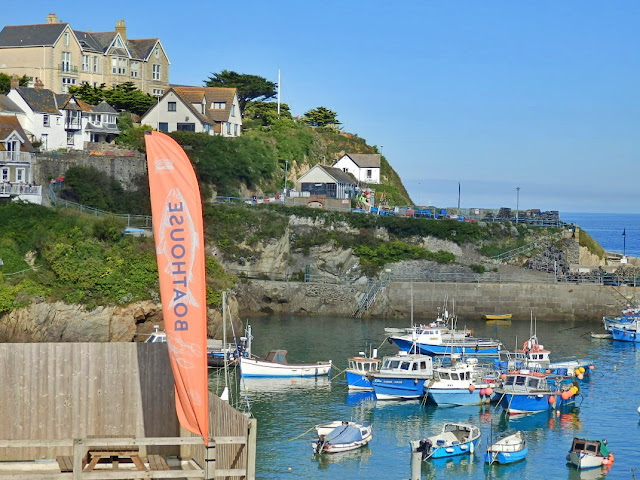 It was a bright, sunny day and we were in Newquay - by the harbour to be exact. 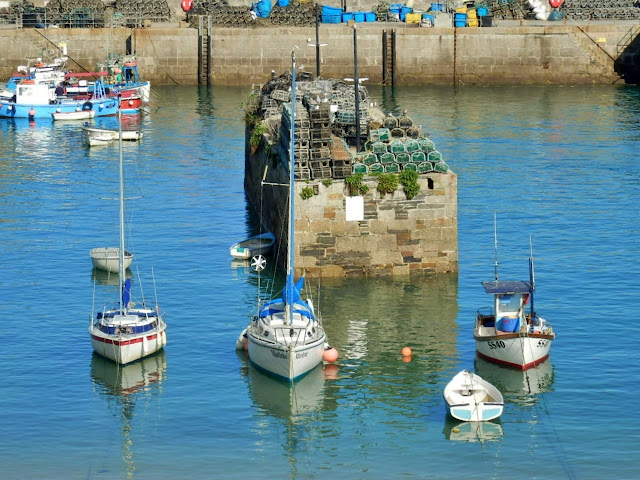 The story of the harbour goes back a long way. In 1439 a quay was built in the manor, then called, Towan Blystra. The quay though became referred to as the 'new quay' - and this is how the town of Newquay got it's name. 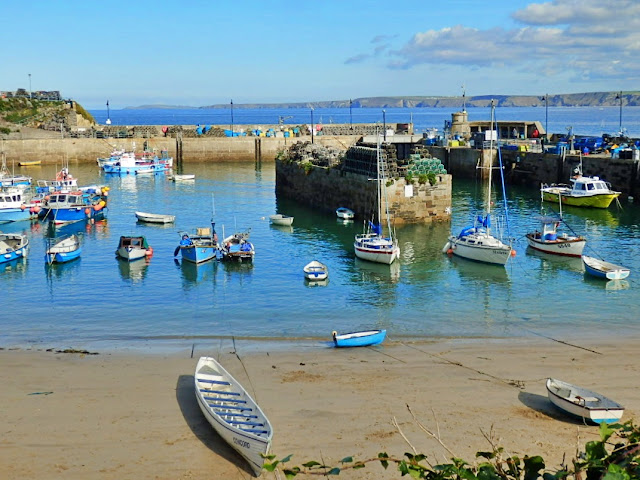 In the late 1700's it became an important harbour for the pilchard (sardines) industry.
In the late 1800's the harbour was developed as an alternative to Fowey and Charlestown. For a  period Newquay was used to export china clay. 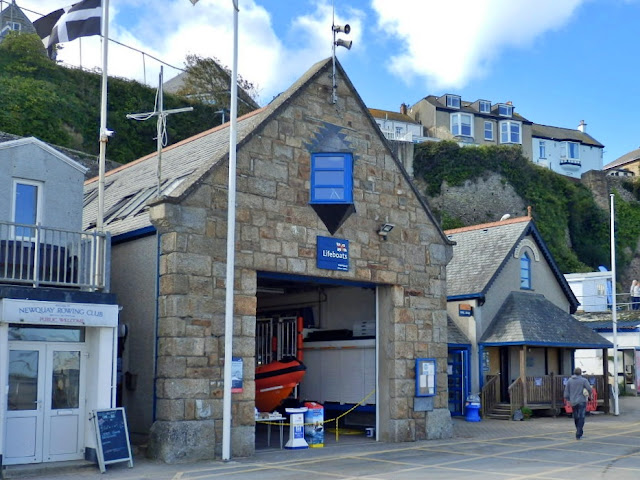 Nowadays the fishing boats mostly catch lobsters and crabs for the European market.
As can be seen below there are various fishing trips, Sea Safaris and cruises to be had from the harbour. 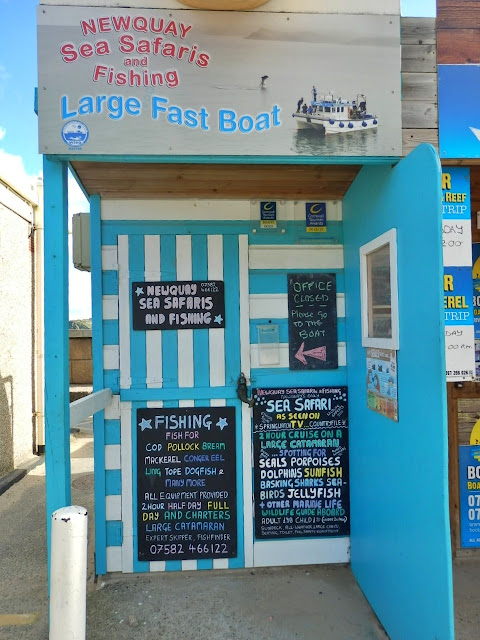 A couple of workers catching up with the local news. 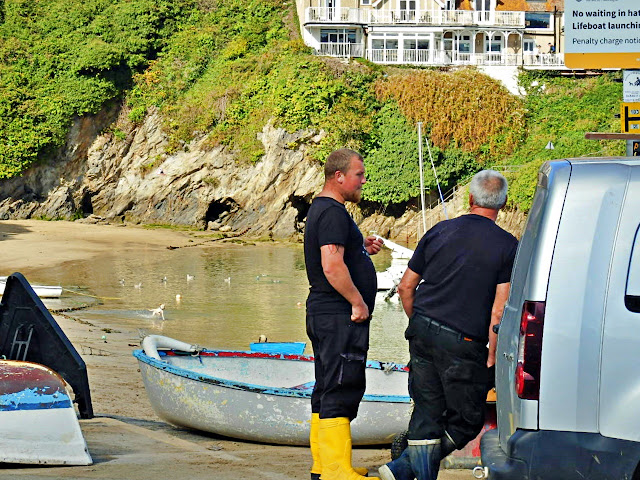 To reach the town, from the harbour, can be a bit of a climb up lots of steps. The views are good though - so worth the effort. 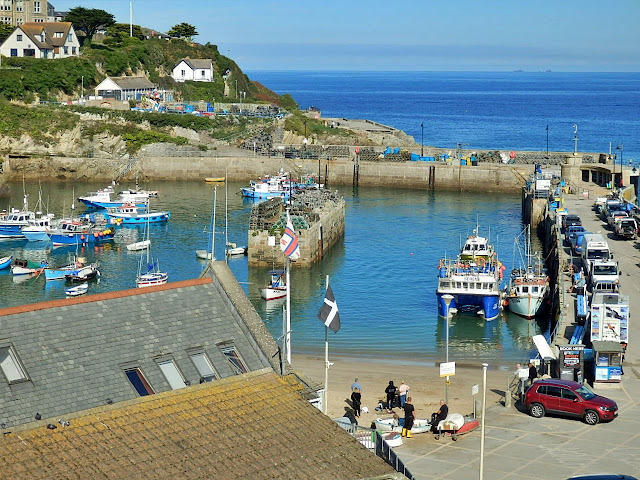 From here the Headland Hotel can be seen on the hilltop, high above Fistral Beach - see my post Photos of Fistral Beach, Newquay, Cornwall. 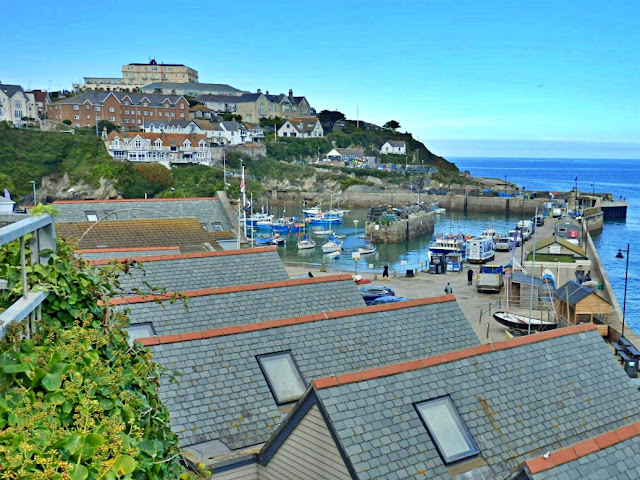 Looking out to the hazy sea, in the distance we spotted a Survey ship. 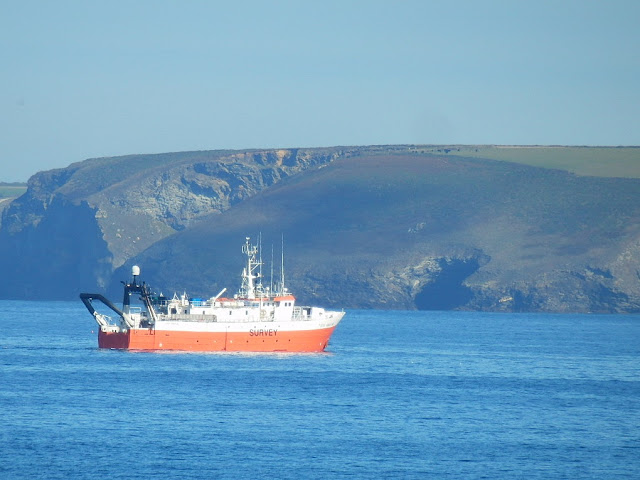 Two photos follow of Newquay art work on display at the side of the steps. The second pic shows the fishing nets and sardines. 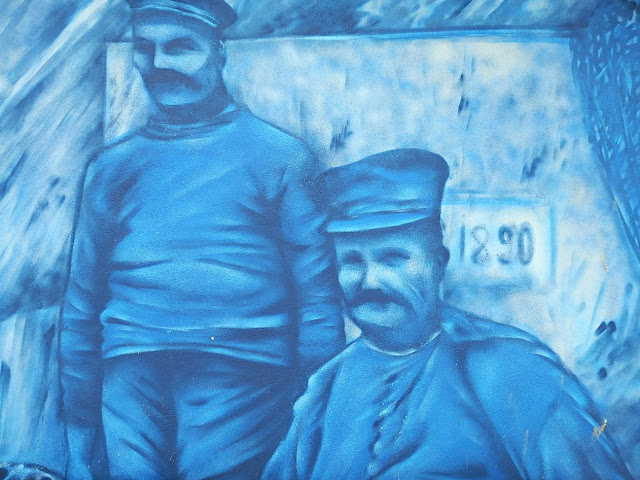 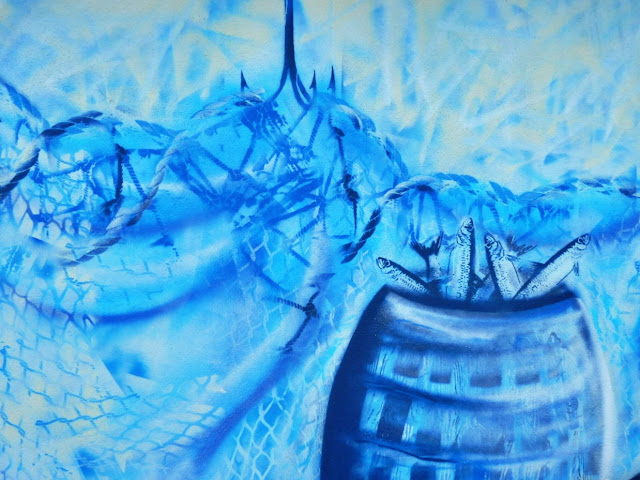 The next photo is of Towan Beach and the house on Towan Island, just along from the harbour. 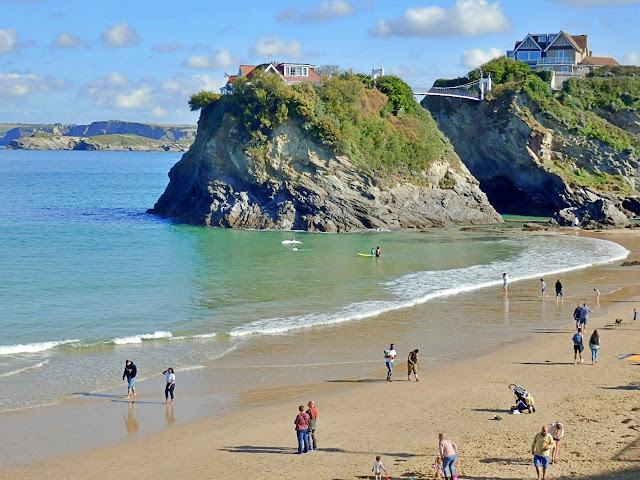 Before anything else though, we popped into Nile's Bakery - for pasties ... 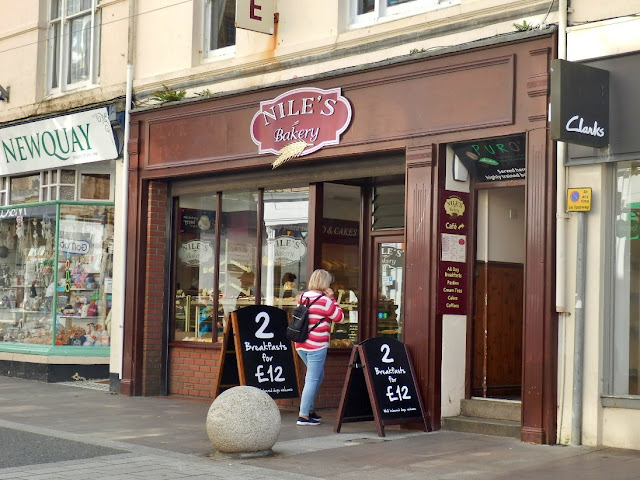 ... and later found a perfect seat overlooking the sea. Somewhere to enjoy our pasties and the view. 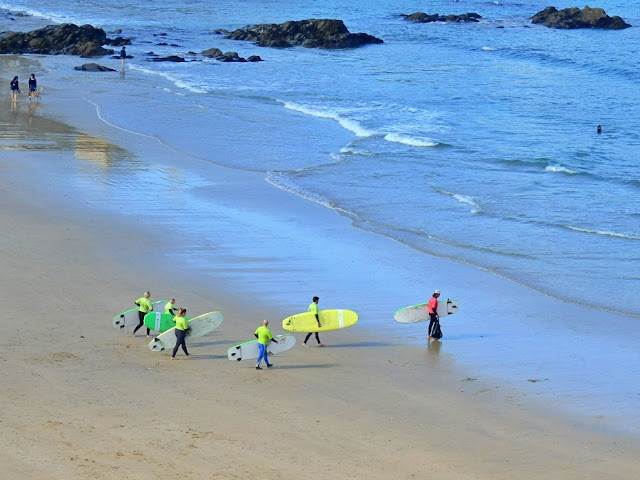 Our seat also gave us a good view of Towan Island - which is available for holiday breaks if you have deep pockets.  I see their prices start at £1,830 for a long weekend or mid week break - see their website. 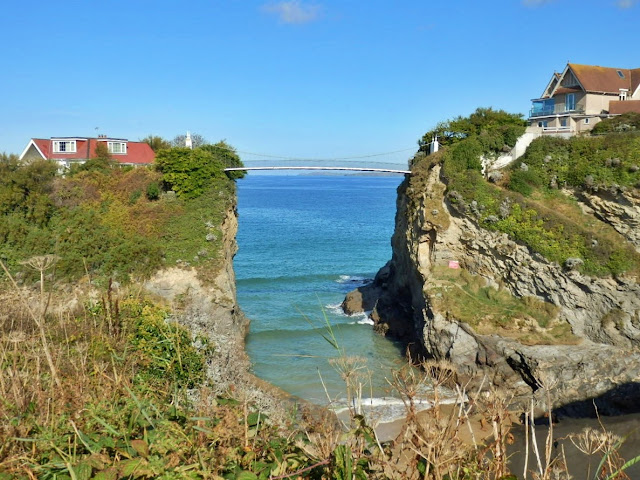 And moving on to something completely different, when even the weather had changed.
This time we were walking in a dull, damp Gover Valley. All was quiet as the trees reached out, not a squirrel or any other creature could be seen or heard. 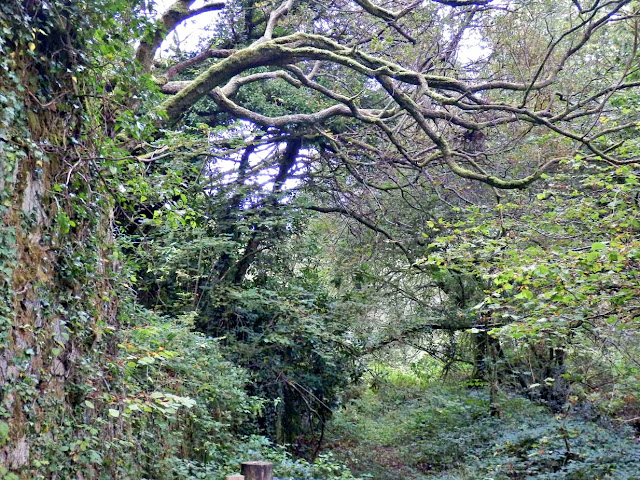 We remembered an old man we met while walking the valley. He told us how his dog never wanted to walk the section of the valley, as shown below. It seems someone had once died here. The atmosphere was certainly damp and chilly - not a place to hang about, so we walked on quickly. Not that I was the least bit scared of course! 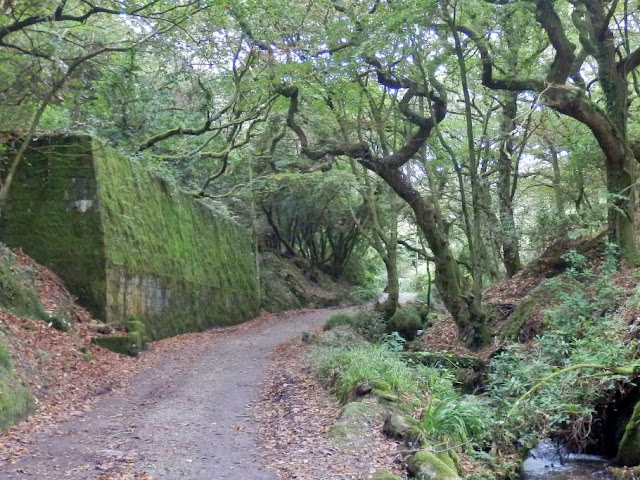 A farm house gate was in view but what on earth was the white figure lingering nearby. Looks like Halloween is approaching. 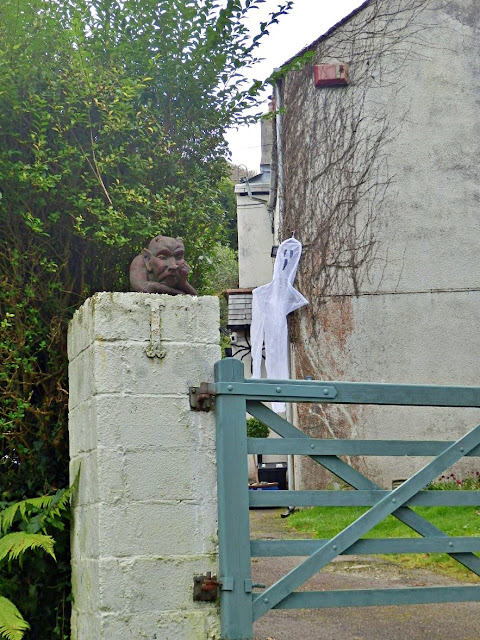 The next day all was bright and cheerful, so a couple of more colourful photos, snapped when out and about, to complete the post. 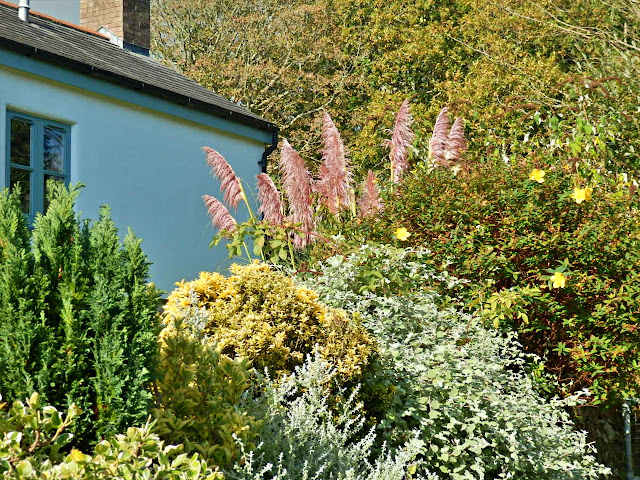 Thanks for visiting my blog, have a happy week ahead. All good wishes ~ Mike. 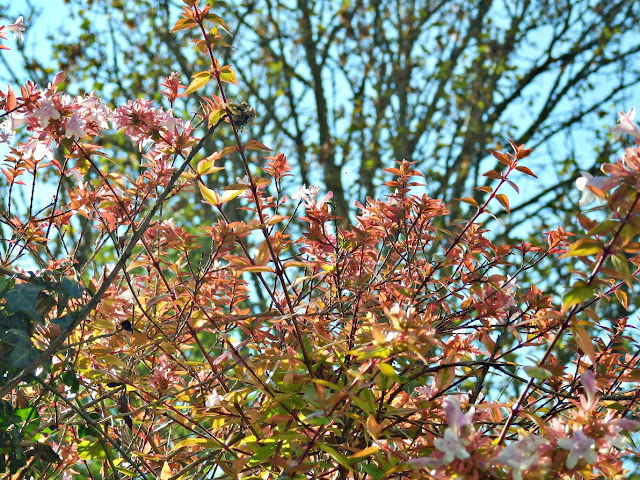 Seeking the Winter Colours of Cornwall

Brrrrr! It was freezing at Pentewan, even if there were shades of blue in the sky. As I returned home I wondered if there was any colour... 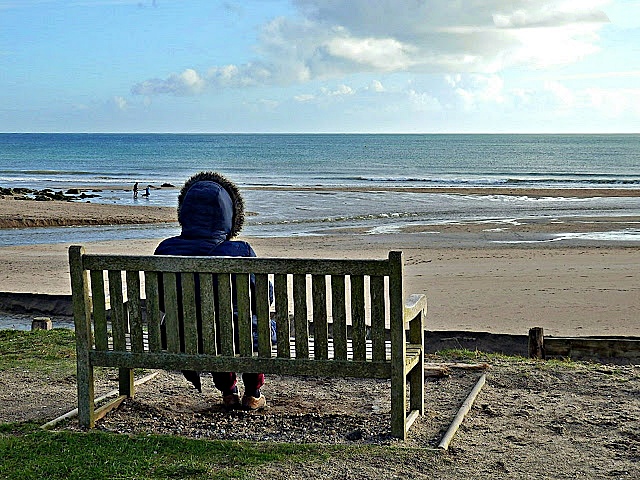