Photos of Par Beach Cornwall Plus a 500 Year Old Bridge 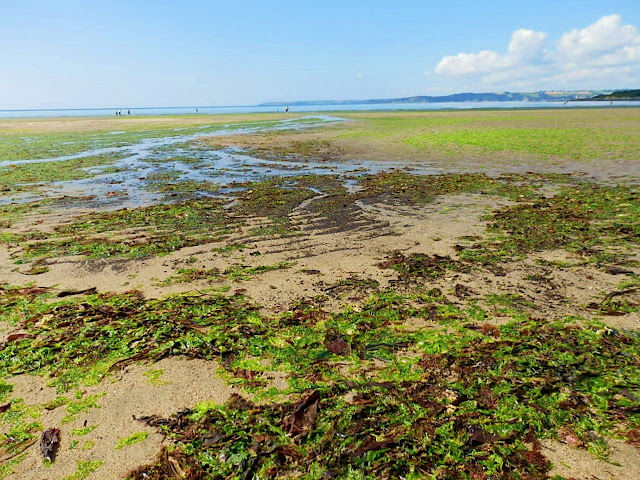 On my previous post I mentioned Par beach, so I thought that today I'd follow on from there. As you can see in the photo above, the tide goes out a long way - a very long way!
Below is looking inland with the sandy beach in the distance. 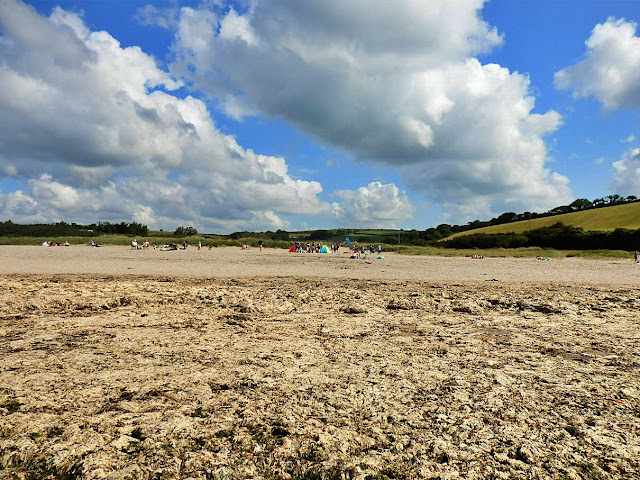 Some ripples left behind by the tide. 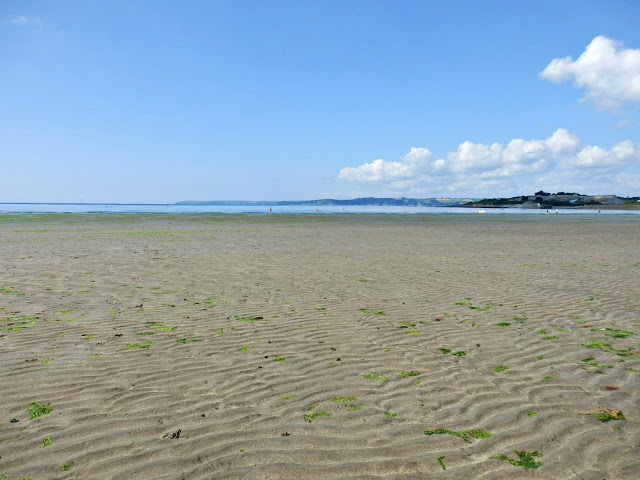 Also left behind by the tide was this attractive jelly fish. I think it might be a Compass Jellyfish (Chrysaora Hysoscella) though I'm not certain. 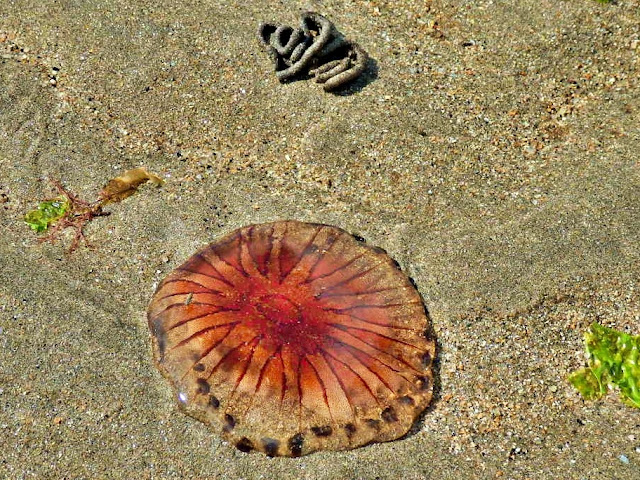 Slowly getting nearer to the sea and the seaweed. 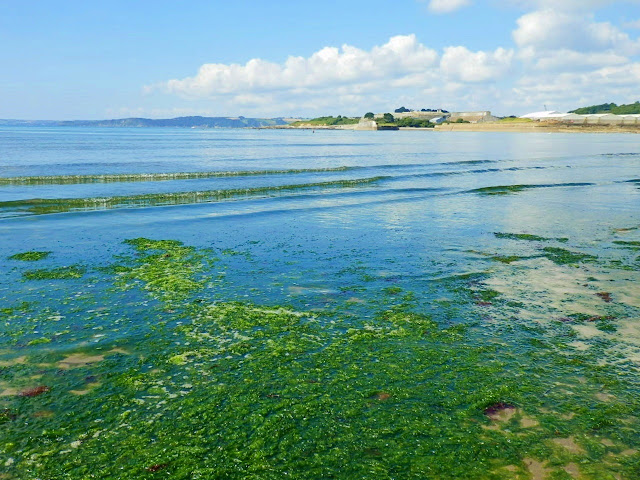 Looking towards the end of the beach you might just be able to see the china clay works, which has its own harbour. 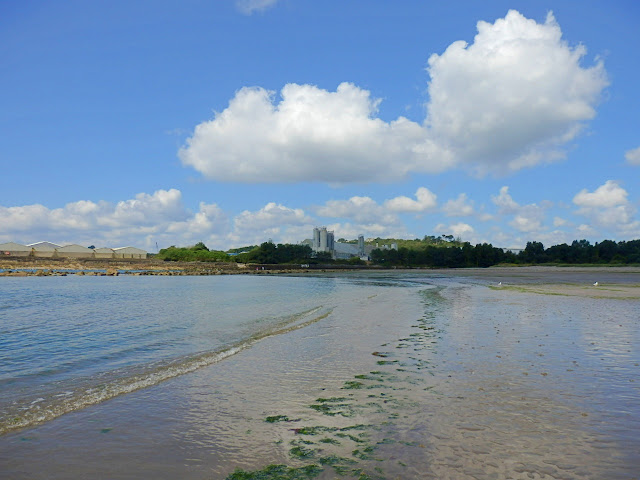 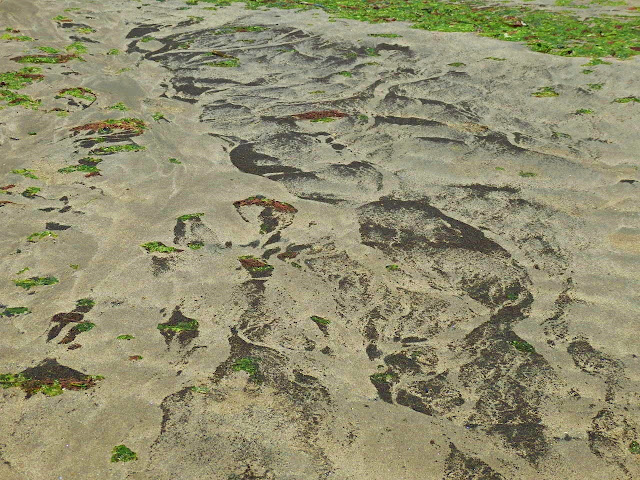 Nearing the far end of the beach, with green fields inland. 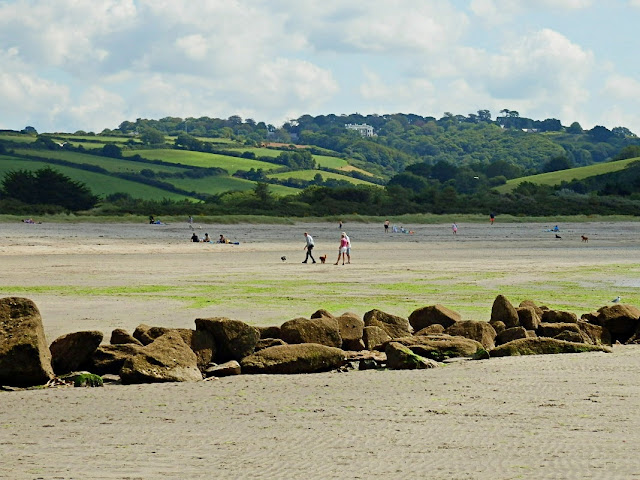 At the end of the beach, by the clay works, is a river and most times there are swans to be seen. It looks like some of the family are missing, hope they are okay. 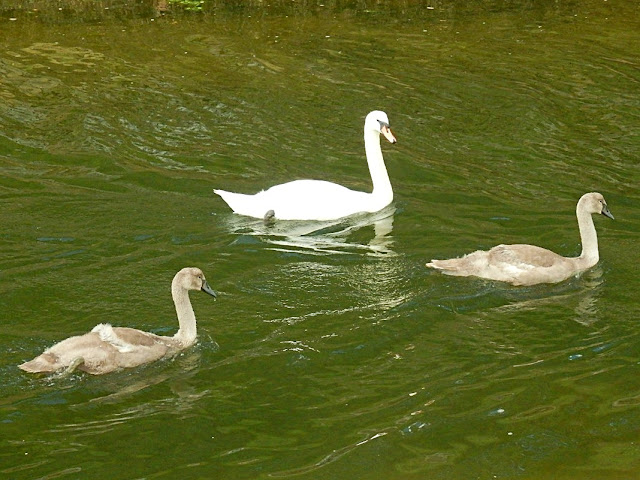 As we walked inland more green fields and wild flowers in the dunes. 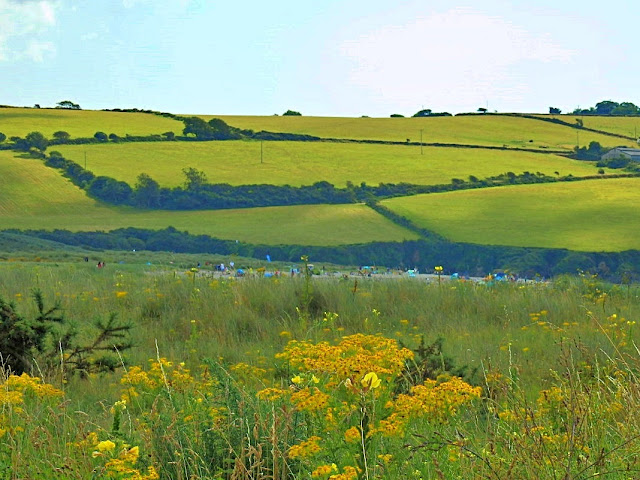 As the sign states there is a clay trail starting here but we walked the opposite way. 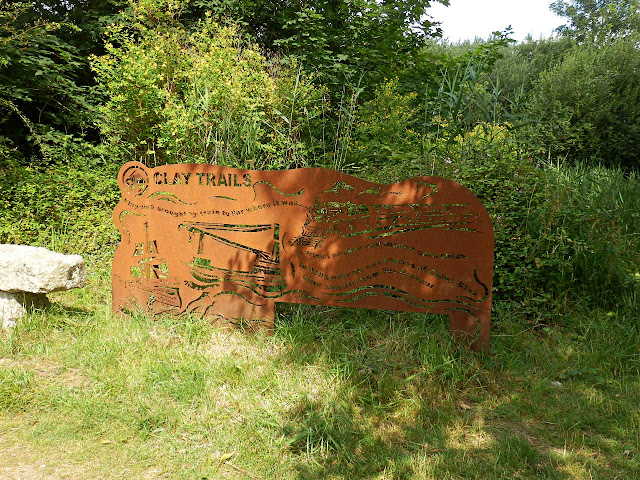 At the back of the beach there is Par Sands Holiday and Caravan Park with caravans and mobile homes - as per the photo below. 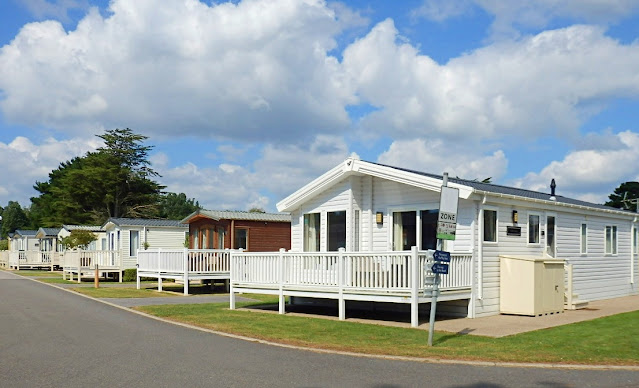 There are also lodges with a view of the small lake. 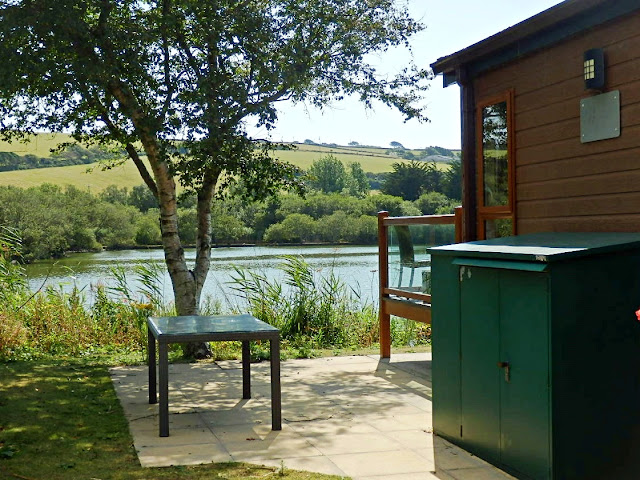 And this is the lake from the opposite side. Many birds congregate here. Lots of Canadian geese on my visit but usually swans, ducks and so on. 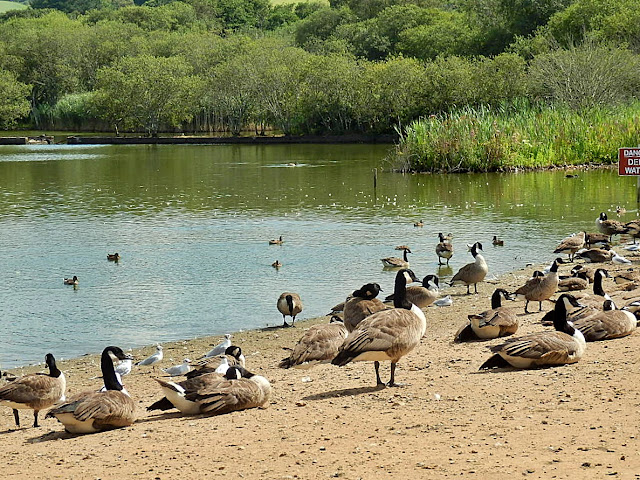 From Par Beach there is access to Cornwall's coastal path. There's a lovely walk to Polkerris, with it's small harbour and beach. See my post Polkerris Harbour, Cornwall on a Perfect Sunshine Day. Photo of Polkerris below.
You'll find the coastal path from the Par Beach car park. Looking towards the sea it's on your left towards the back of the car park. 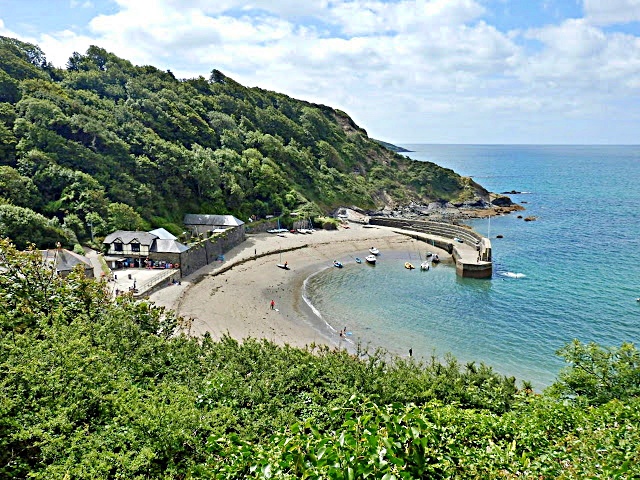 A FEW OTHER BITS

In a previous post I mentioned the ceramic art work on display in St. Austell town centre. I've just noticed another piece I previously missed. 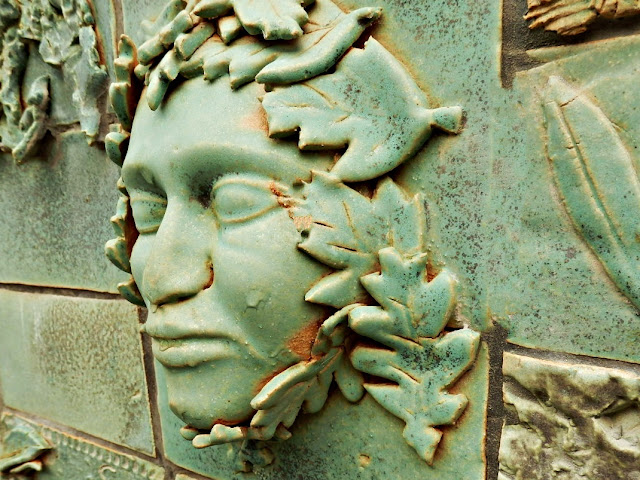 On the outskirts of  St.Austell town there is a very old bridge that is rarely given a second glance. It no longer carries traffic, other than perhaps a few bicycles. This is a shame because the bridge is well over 500 years old.
We know it's minimum age because it was mentioned by someone called John Leland in 1538. He was King Henry VIII's Chaplain who was sent out around the country to gather material for a history of England.
Leland, sometimes spelt Leyland, didn't seem to think much of St. Austell as he wrote (in old English): "... the poore toun of St Austelles is nothing notable but for the paroch chirch. And there is a bridge of the same name."
Below is the bridge. Hard to imagine that crossing this was then the main route into St. Austell from the west. 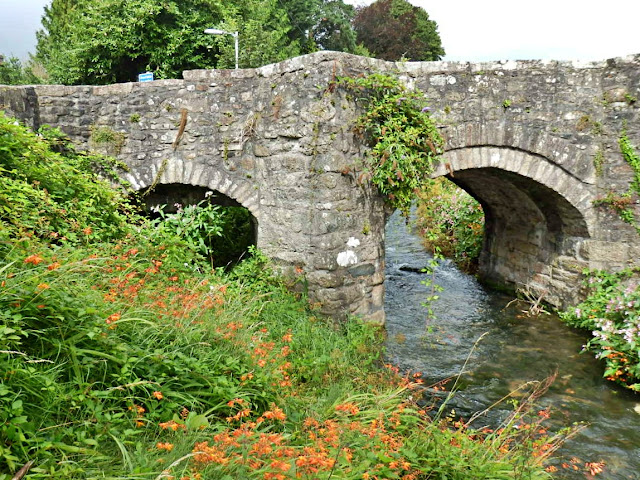 And finally, the lilies in our garden have ventured forth. 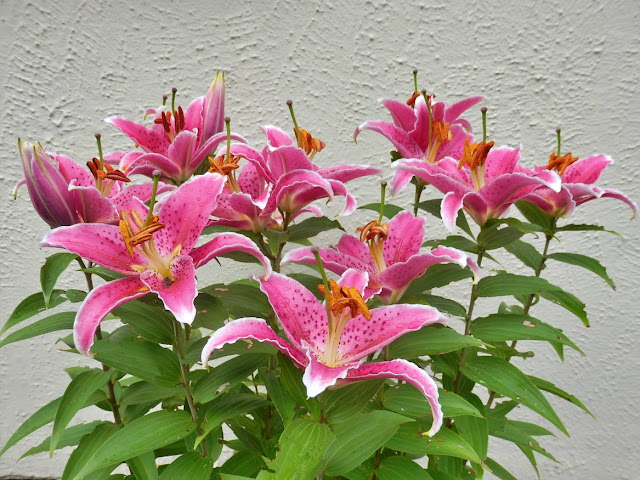 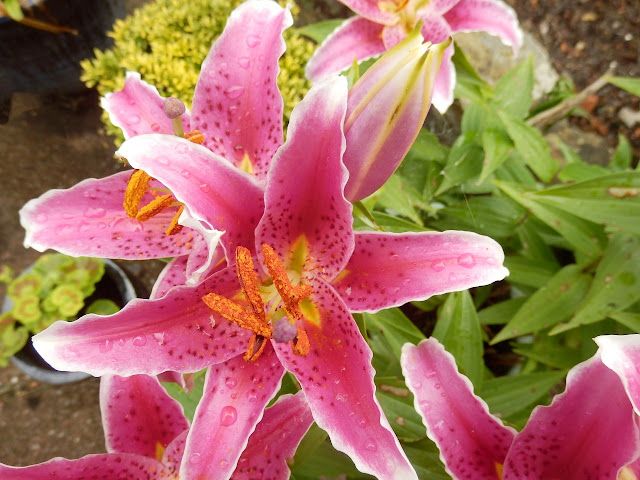 Thanks for visiting my blog, hope you have an interesting week ~ Mike.