Colours of Cornwall in Autumn 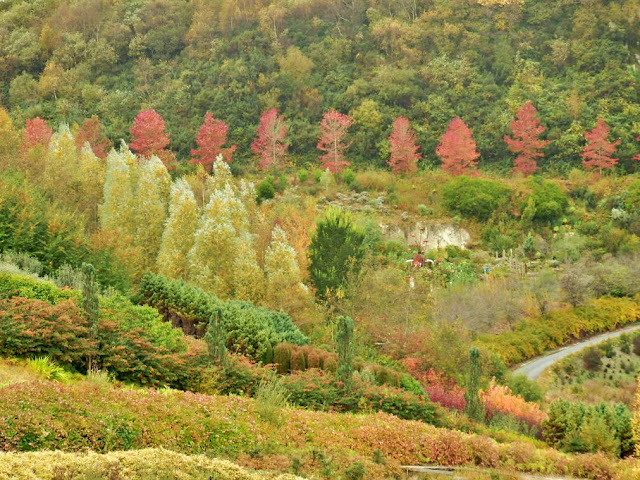 Gosh, it was raining cats and dogs when we arrived at Cornwall's Eden Project for a short walk. 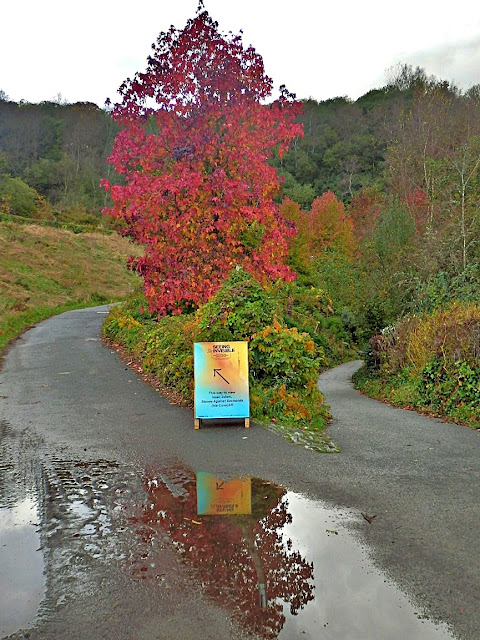 We hurried down to the Mediterranean biome for some shelter and to look at some of the plants. 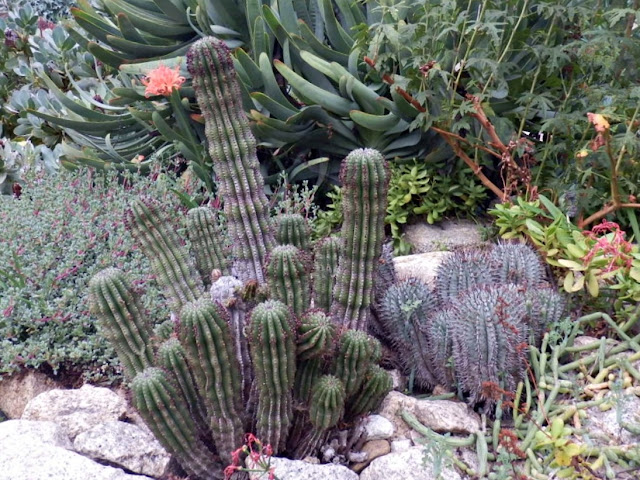 We plonked ourselves on a seat, where we often sit when visiting the biome. A friendly robin came to say hello.

This reminded me of a good friend, sadly now deceased, who believed robins brought him good luck.
One Saturday he was off to a football match to see his team play an away game. The team, by the way, also had the nickname of 'the robins'.He drove about half the journey and pulled into a lay-by for a cup of tea. His wife was with him and he pointed out a robin sitting nearby. The bird then hopped onto his car bonnet. My friend said a few words to the effect that this was lucky - and therefore his team would win.Before he continued his journey he crumbled up a biscuit for the robin. As he left the lay-by, he could see the robin feeding away and the bird appeared to look up as if in acknowledgement.Yes, his team did win. But he was luckier than this because he bought a club lotto ticket as he entered the ground. At half time the result of the lotto was called over the loud speakers and my friend won £1000! So the robin did bring him luck. And maybe leaving something for the bird brought him some extra luck. Kind acts are often rewarded. 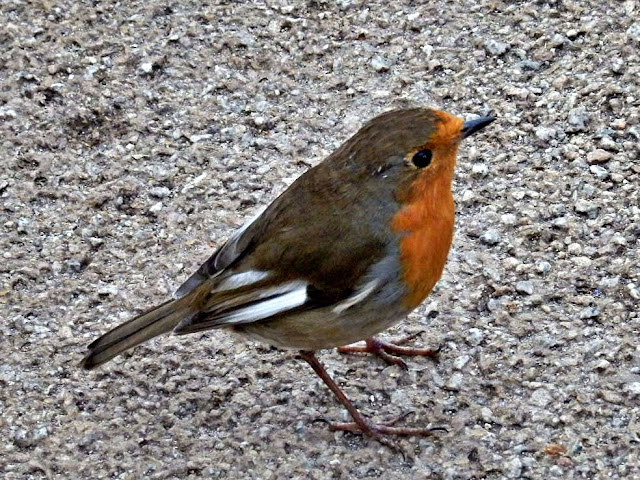 Anyway, still in the Mediterranean biome, there was also an owl - a big one! 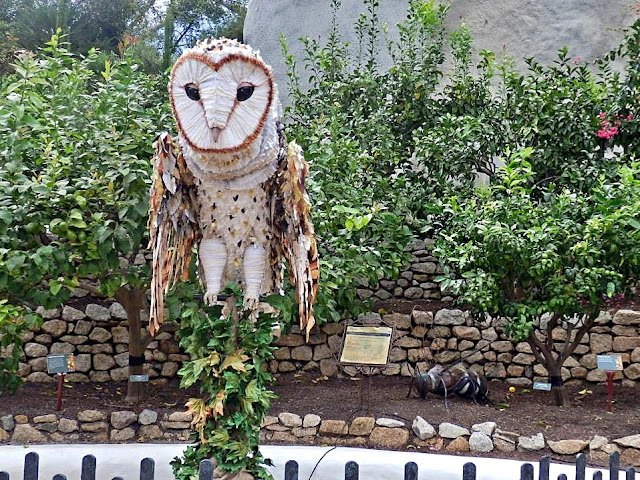 The colours are uplifting ... 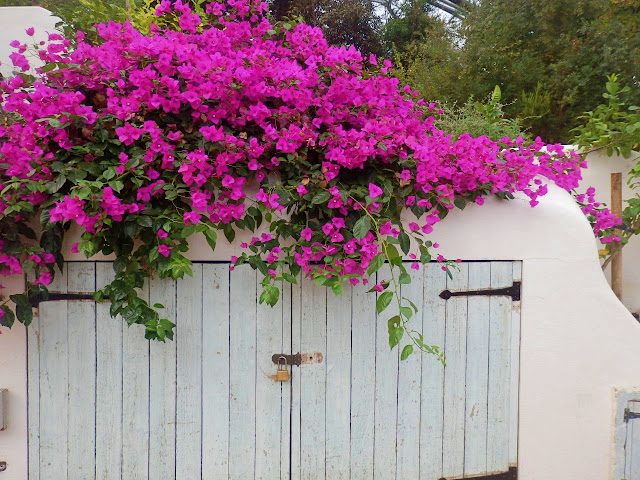 ... even though the rain was still chucking it down. 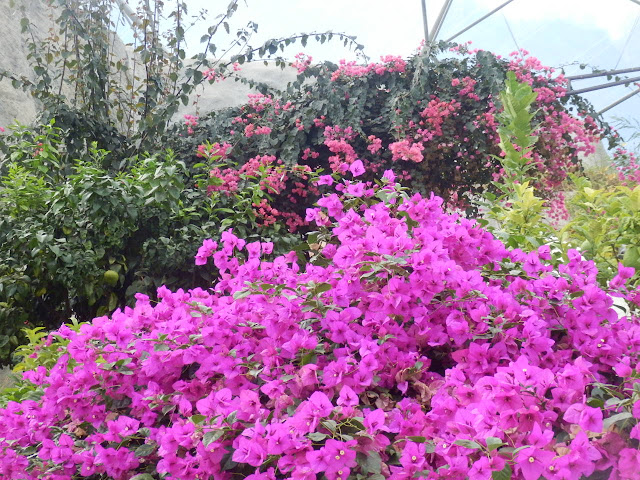 Another photo from the same biome. 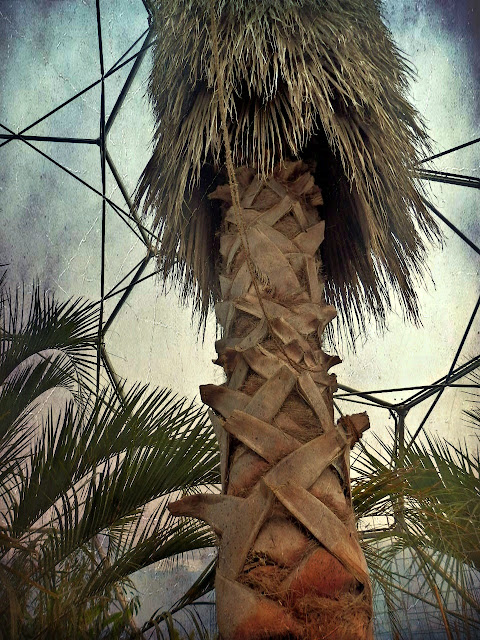 We decided to head for the Rainforest biome. 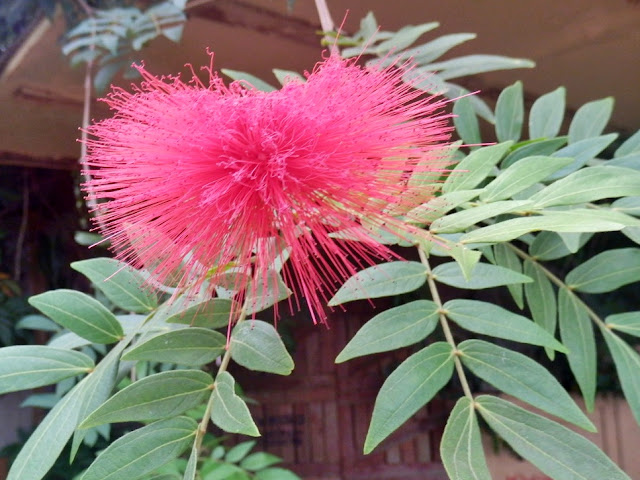 Pink flowers to welcome us ... 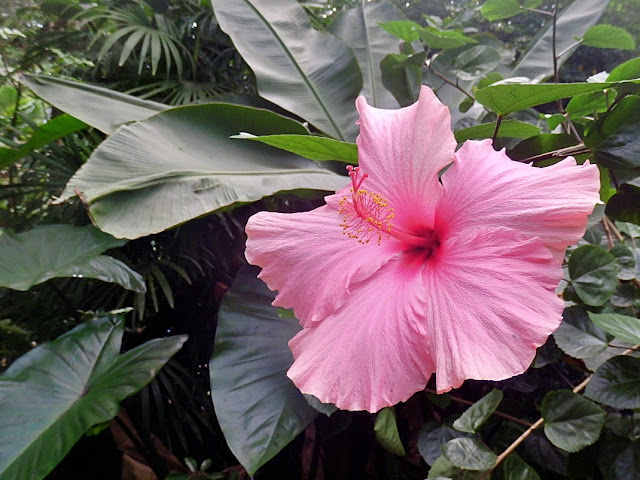 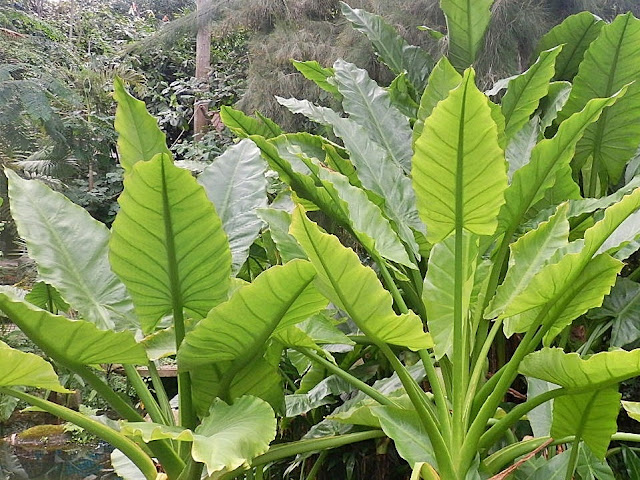 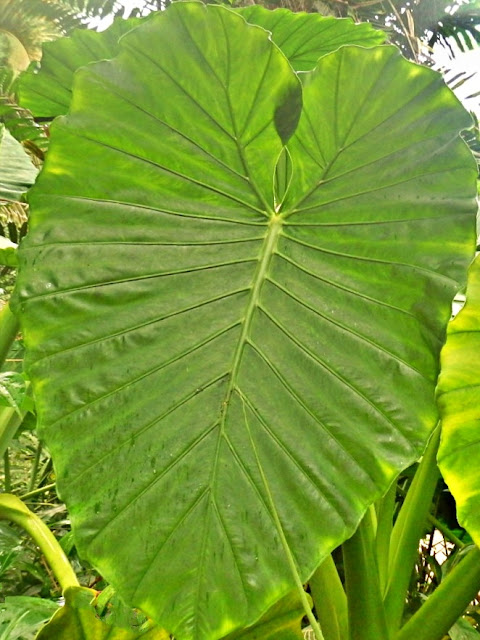 There was also a photo from a real rainforest.
An information board explained the following:
A little Ot Danum girl running through the forest far up the Melawi river in Kalinantan, the Indonesia part of the island of Borneo. She already knew the names and uses of many plants. 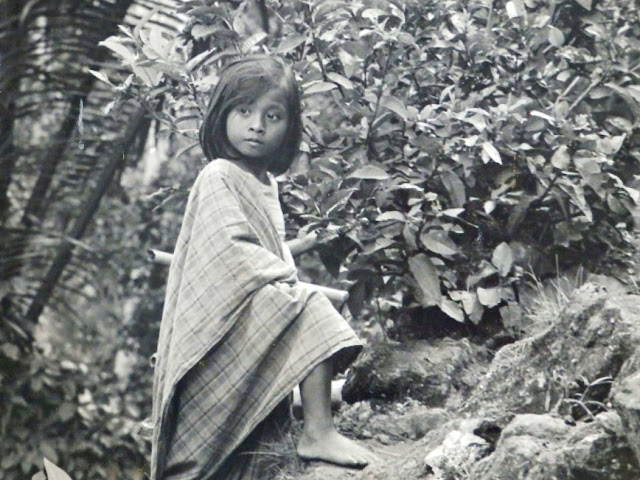 We continued wandering around the rainforest biome, in the pleasant warmth, and saw this basic building pleasantly decorated. 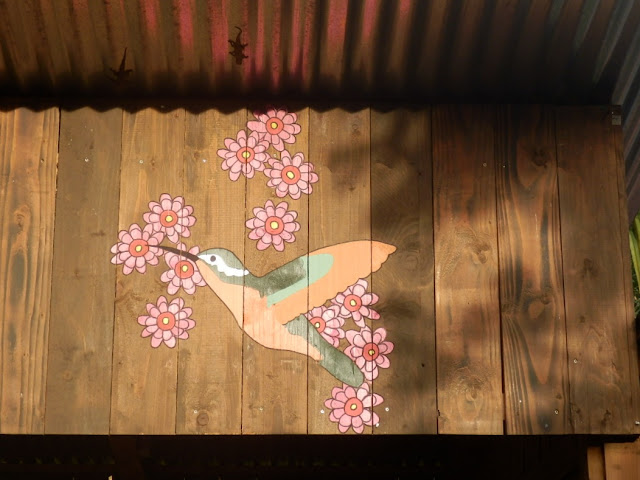 It was soon time to wander back to our car. 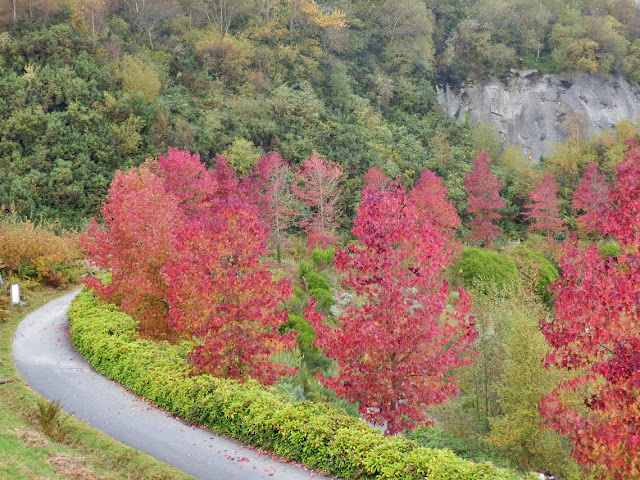 Mentioning the robin, in this post, reminded me of a meeting with a young bird we had in our garden, a while back.
We were doing some gardening when the little bird below flew onto my wife's gloved hand ... and stayed there - it wouldn't move. 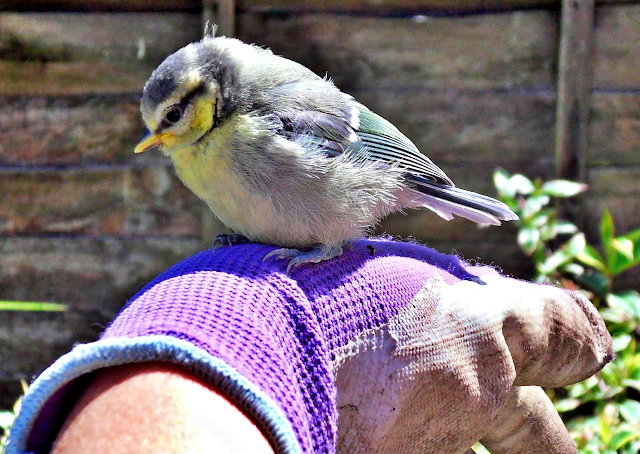 I went indoors to get my camera and when I returned the blue tit still hadn't moved at all. The RSPB (The Royal Society for the Protection of Birds) advice is: "Fledglings are extremely unlikely to be abandoned by their parents. Just because you cannot see the adult birds does not mean that they are not there. The parents are probably just away collecting food - or are hidden from view nearby keeping a watchful eye, or even being frightened away from their youngster by your presence. Fledglings should be left where they are, in the care of their own parents."
As for our young bird we settled him in the garden, where he would be safe, and in a short while he was gone.
There's not very much colour about at the moment, but saw this lonely nasturtium stretching through a fence. 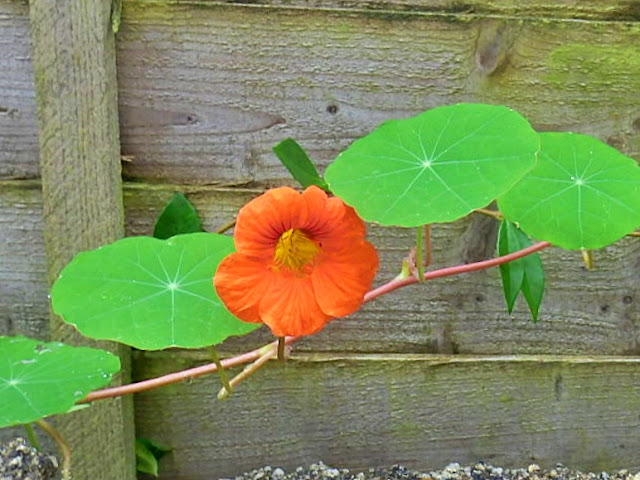 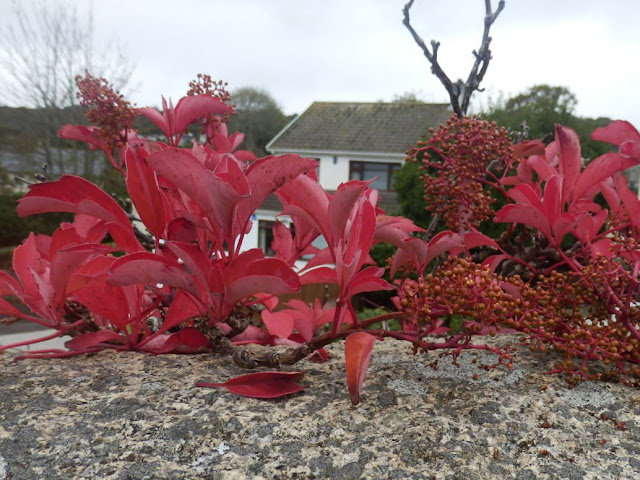 Of course it is possible to overdo leaves! 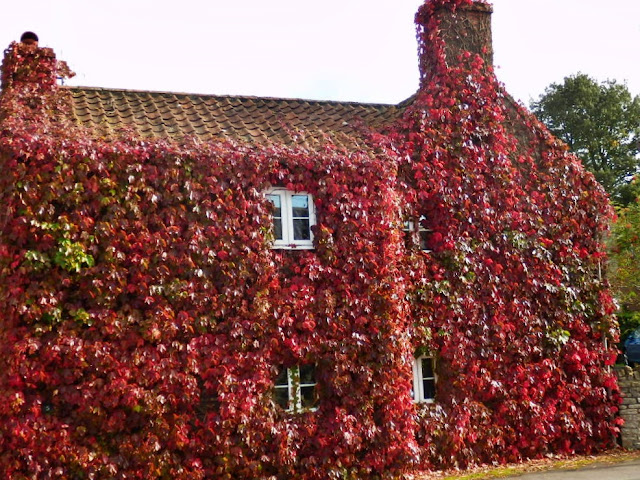 Oh well, guess that's it for this week, thanks for visiting my blog, enjoy your days ~ Mike.